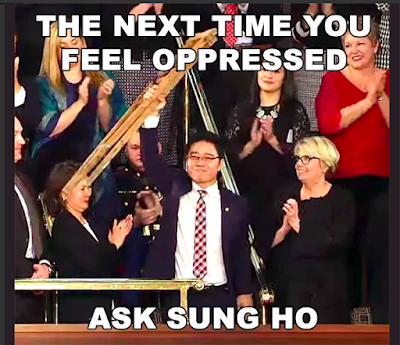 Why does the Kim Family Regime have nuclear weapons?

There are six purposes for the KFR’s nuclear weapons.

The first is survival. We know from Hwang Jong Yop (1997) that the regime believes the US will not attack a nuclear armed nation but if there was a war on the Korean Peninsula they believes that if it did not have nuclear weapons that the US would use them on the north. So the first purpose is for survival.

The third is enhanced reputation and legitimacy - in the KFR mind nuclear weapons make it a power that should be treated like Pakistan and of course it is believed to enhance domestic political legitimacy the elite and with the people.

Fourth they support the seven decade plus blackmail diplomacy strategy to conduct threats and provocations to gain political and economic concessions.

Fifth similar to enhanced reputation it supports the regime’s “business” as a proliferator. It has proliferated nuclear technology to Syria (why did the the Israelis bomb the nuclear site in Syria? Although we have not seen much nuclear proliferation they are proliferating missile capabilities and developing those missiles with a nuclear capability makes them more marketable.

Sixth is that if war does take place they will employ them and employ them quickly. The success of their campaign plan is dependent on rapid occupation of the peninsula before the US can reinforce it so I expect they will use nuclear weapons against Korean port facilities (e.g., Pusan) and the 7 UN based in Japan that are critically important ISBs for the flow of US forces. And if the alliance conducts a counter attack into the north I would expect they would use nuclear weapons on their own soil. A target would likely be an amphibious landing on the north’s east coast.

So if we think about it there are a lot of reasons why the KFR believes nuclear weapons are in its interest and there is not much anyone can entice them with to give them up. Food aid? Diplomatic recognition and normalization? Security guarantees (like the US and Russia have to Ukraine in return for them giving up nuclear weapons)? There is no good reason why they should give them up. That is why I always say that the only way we will see an end to the nuclear program and the crimes against humanity being committed against the Korean people living in the north by the mafia-like crime family cult known as the Kim Family Regime is through the establishment of a unified United Republic of Korea (UROK) that is non-nuclear, economically vibrant, secure and stable with a liberal constitutional government determined by the Korean people.

Of course that cannot happen until there is no more KFR. There are only four paths to this.

Peaceful, which is most complex and hardest to achieve but should be the basis for all unification planning.

Second is war because that will destroy the regime but of course we do want to expend the blood and treasure that will cost.

Regime collapse- also complex and dangerous and could lead to war or at least some level of conflict that will cause huge suffering.

And fourth is the outlier: internal dynamics lead to the fall of the regime that is replaced by new leadership that if nurtured and encouraged could seek peaceful unification.

That is a long shot but it is also why we need to continue the strategic strangulation campaign (as the administration calls it extreme pressure) while we cope, contain, and manage the situation to allow internal dynamics to cause change (and of course all this must rest on a combined alliance military capability that can deter, defend, fight, and win).
at January 27, 2018 No comments:

If the Kim Regime Falls in North Korea, Sustained Armed Resistance Could Follow

I am glad Steve is writing about this.  It is important that we recognize the likely resistance that will occur if the Kim Family Regime collapses (and very similar conditions will exist in post-conflict after the regime is destroyed).

"Thoughts on Irregular Threats for north Korea Post-Conflict and Post-Collapse: Understanding Them to Counter Them" (2010)
http://smallwarsjournal.com/jrnl/art/irregular-warfare-on-the-korean-peninsula

I would say this to Steve (and anyone else who cares about this):  The war, regime collapse, post-conflict, and post-collapse operations will be the biggest "by, with, and through" operation in which the US has ever participated.  We owe it to our blood ally (and to the American people) to help them lead their own unification process but not lead it ourselves.  north Korea is not Iraq and Afghanistan and the ROK military and ROK government is not the Afghan and Iraq military and government.  We cannot approach the north Korea problem the same way we have Afghanistan and Iraq even though the conditions, conflict, and resistance will likely be far worse in north Korea than anything we have encountered in Iraq and Afghanistan (or Syria - and there are lessons there to be learned with the great and medium power interventions).  We are going to have to enable and assist our much more capable partner and blood ally the ROK.  But we cannot occupy the north with US forces and we cannot take the lead in the stabilization and unification process.  If we do we will create a quagmire that will be far worse than the quagmire we have in Afghanistan, Iraq, and Syria and far worse than the one in which the ROK will find itself if they are leading and we are assisting (but it will be a quagmire nonetheless).

If the Kim Regime Falls in North Korea, Sustained Armed Resistance Could Follow

https://www.worldpoliticsreview.com/articles/24060/if-the-kim-regime-falls-in-north-korea-sustained-armed-resistance-could-follow
At some point, the brutal and parasitic Kim family dictatorship in North Korea must end, but it is impossible to tell whether it will happen sooner or later. Many predictions that the regime would fall have proven false, but it simply cannot last forever. Whether by internal conflict or by provoking a war with South Korea and the United States, the Kim regime eventually will go.Stressing that “Korean unification is a Korean affair,” South Korean President Moon Jae-in is convinced that whenever reunification comes, it should be under the leadership of the democratic and economically vigorous south, rather than the decrepit, economically incompetent and brutal regime of Kim Jong Un in the north. Seoul has prepared extensively, establishing a National Unification Board in 1969 and later upgrading it to the Ministry of Unification, which has made substantial plans for a post-Kim stabilization of North Korea.This would certainly be a good thing for everyone, except Kim loyalists. In addition to the Korean people, other nations, including the United States, would benefit from a unified, peaceful, democratic and prosperous Korean Peninsula. The problem is getting there: The Kim regime will not go easily, and even if it is gone, the job will have only just begun.Today, South Korea recognizes that stabilizing, rebuilding and integrating North Korea will take a massive effort, but it also believes that it will be relatively peaceful. History has made Koreans leery of external intervention, but Seoul assumes most North Koreans will see South Koreans as fellow countrymen and therefore accept—even welcome—unification engineered by their southern brethren and immediately embrace democracy, the rule of law and the free market system.
(Continued at the link below)
https://www.worldpoliticsreview.com/articles/24060/if-the-kim-regime-falls-in-north-korea-sustained-armed-resistance-could-follow
at January 27, 2018 No comments:

I attended at conference on Korea this week and learned the following information from the discussions.  With Chatham House rules I cannot identify the conference or the participants.  But I think the information discussed provides important information and insights into our Korea foreign policy.

1.  north Korea is the most important foreign policy issue for President Trump and he is deeply engaged in the policy process with his Korea team. His policy is maximum pressure and engagement.

2.  President Trump has made over 200 phone calls to world leaders and key influencers with the main subject being north Korea.  He has had over 20 calls and meetings with President Xi in which north Korea was the main topic of discussion in addition to multiple calls and engagements with President Moon and Prime Minister Abe.

4.  There is an administration policy and strategy and while it is obviously close hold we are seeing elements of the strategy through statements, tweets, and actions so we should pay attention.

5.  One of the key elements of the strategy is President Trump's desire to undo the notion that there is no military option in north Korea (which undercuts our diplomatic efforts when people make such statements) and instead he has sought to raise the credibility of our military actions to ensure that Kim Jong-un knows that we are capable and if he threatens, we truly have the will to use military force appropriately.  There is frustration with think tanks and pundits and analysts who continually state there is no good military option as that undermines our strategy.

6.  The President's tweets illustrate the range of actions he is willing to take.  He is willing to meet with Kim Jong-un but he also will not hesitate to use military force if necessary to defend the US.

7.  Finally, we should recall that during the campaign north Korea was not an issue.  However, during the transition the President recognized the importance of the threat and has made north Korea his number one foreign policy priority.

Research and News Links (Under Construction)

The purpose of this site is to share information on national security issues with anyone who has an interest in these topics. My focus is on National Security Issues of Policy and Strategy; Asia, with particular emphasis on Korea and China, as well as Special Warfare (Unconventional Warfare and Foreign Internal Defense) and Surgical Strike (Counterterrorism) and how they relate to US National Security.
I am using a format similar to the email messages I send to about 1000 colleagues on my private email list serve that I have been managing since 1997. Each entry will include the title of the news article, the first few paragraphs and a link to the entire article. My comments will be in blue arial font and key excerpts/quotes from the article will be in the article's original format. As a good Soldier always strives to improve his fighting position, I will endeavor to improve this site.
Also follow on twitter at @davidmaxwell161

All opinions expressed on this site are the author's own.

Thought for the Day

"By three methods we may learn wisdom: First, by reflection, which is noblest; second, by imitation, which is easiest; and third by experience, which is the bitterest." - Confucius

OSS Society: PhD's Who Can win a Barfight