'No problem at all' for North Korea leader Kim's health, says official

Of course we would not expect the answer to be anything other than this. However, I wonder what the answer would be if the question of "who is really in command in north Korea?" was asked.  There is a real danger that this visit to the South could mean that the Kim Jong-un may not have full control and thus there is the potential for instability which can be a real danger to the ROK, the alliance and the region.  Or it could mean that there is an opportunity to exploit that situation if the ROK can deal with the right people who have the potential to rise to power.  The ideal situation (other than a desire to peacefully unify by the north) would be for a new leader to emerge who would seek the 5 R's:  respect, reconciliation, reform, rebuilding, and reunification (R5).  But on the other hand Kim Jong-un may be in full control and this is simply a new page to the Kim Family Regime playbook - while the tactics and operational approach may change the ends/vital interests/strategic objectives of the regime have not.  We need to be cautious so we "won't get burned again" yet agile and flexible enough to exploit any opportunities that may arise from the situation in Pyongyang.  Again, not to beat a dead horse but President Park has positioned herself and her government to be agile and flexible with the right policy foundations and initiatives:  Dresden Initiative, Trustpolitik, the Northeast Asia Peace and Cooperation Initiative (NAPCI) all resting on the strength and capability of a strong military deterrent force in the ROK/US Alliance that is prepared for any contingency that might arise from any of the paths that could lead to unification:  peaceful unification based on mutual consent, internal resistance leading to a new nK leader who seeks unification (R5 above), catastrophic regime collapse, or the worst case, war.

'No problem at all' for North Korea leader Kim's health, says official 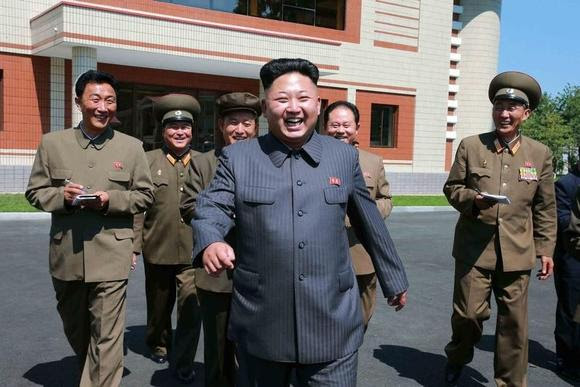 (Reuters) - A senior North Korean official on a rare visit to South Korea has denied reports that the country's young leader Kim Jong Un is ill, saying there is "no problem at all," a South Korean minister said on Sunday.
Speculation that Kim's unusually long absence from public view may be due to ill health was fueled by a North Korean TV report that he was suffering from "discomfort," which was regarded as an implicit acknowledgement that he was sick.
Kim, 31, who is frequently the centerpiece of the isolated country's propaganda, has not been photographed by state media since appearing at a concert alongside his wife on Sept. 3.
"I said to Secretary Kim Yang Gon while in a car there was a report that (Kim Jong Un) was in 'discomfort' and asked him how was his health, and Secretary Kim said there was no problem at all," South Korea's Unification Minister Ryoo Kihl-jae told KBS television on Sunday.
Kim Yang Gon is a senior official of the North's ruling Workers' Party and a long time aide close to the North's leaders who was part of a high-level delegation that made a surprise visit to the South on Saturday.
Ryoo is South Korea's main policymaker on inter-Korean affairs and was host to Kim, Hwang Pyong So, a top military aide and confidant to Kim Jong Un who headed the delegation, and Choe Ryong Hae, another close adviser to the leader.
North and South Korea agreed on Saturday to resume reconciliation talks after Pyongyang sent its most senior delegation ever to its neighbor at just 24 hours' notice.
Kim Jong Un had been seen walking with a limp since an event with key officials in July and in a pre-recorded documentary broadcast by state media in late September appeared to have difficulty walking.
Kim has rapidly gained weight since coming to power after his father died of a heart attack in 2011, photos released by state media show.
North Korea observers speculate Kim's weight and family background may have contributed to his condition.
(Reporting by Jack Kim and Yang Kahyun; Editing by Jeremy Laurence)
at October 05, 2014

Research and News Links (Under Construction)

The purpose of this site is to share information on national security issues with anyone who has an interest in these topics. My focus is on National Security Issues of Policy and Strategy; Asia, with particular emphasis on Korea and China, as well as Special Warfare (Unconventional Warfare and Foreign Internal Defense) and Surgical Strike (Counterterrorism) and how they relate to US National Security.
I am using a format similar to the email messages I send to about 1000 colleagues on my private email list serve that I have been managing since 1997. Each entry will include the title of the news article, the first few paragraphs and a link to the entire article. My comments will be in blue arial font and key excerpts/quotes from the article will be in the article's original format. As a good Soldier always strives to improve his fighting position, I will endeavor to improve this site.
Also follow on twitter at @davidmaxwell161

All opinions expressed on this site are the author's own.

Thought for the Day

"By three methods we may learn wisdom: First, by reflection, which is noblest; second, by imitation, which is easiest; and third by experience, which is the bitterest." - Confucius

OSS Society: PhD's Who Can win a Barfight